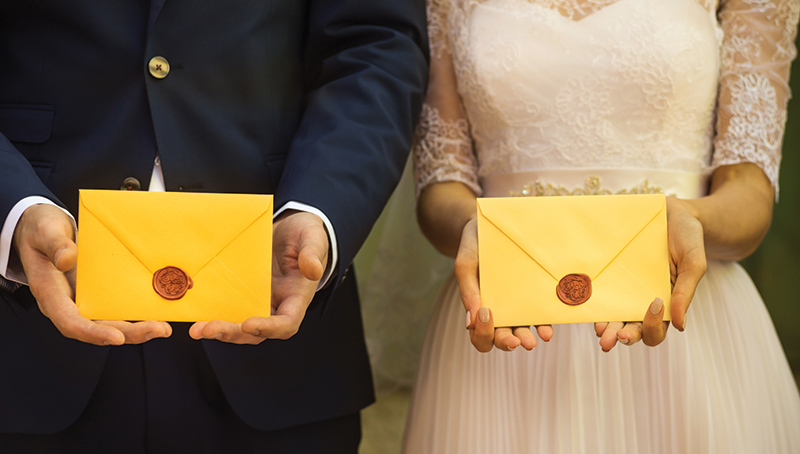 At Elevee Paper in Rehoboth Beach, owner Nicole Bailey urges brides to give thank-you notes the same attention they do to their wedding invitations. “We encourage them to order everything in one cohesive look: the save-the-date card, the invitation and the thank-you notes,” she says. Another option is to select stationery the newlyweds will use going forward, such as folding cards with both of their initials. Think of it as establishing your signature look as a married couple.

According to bridal etiquette, the couple has up to one year from the date of the wedding to send thank-you notes. In reality, sooner is far better than later, says Litzie Clayton, owner of Especial Day, a gift and stationery store in Wilmington. “Get them done as quickly as you can when your memories are fresher and you can make the notes more personal,” she says.

Brides who receive gifts before their wedding day can get a head start. It is acceptable to mail the notes before the big day. Or brides can write their thank yous in advance and then send them out after they have walked down the aisle. “If you write some of them in advance, the rest will be less daunting when you get back from your honeymoon,” Clayton says.

If a family friend or relative discovers that more than six months have passed and no one has received a thank you from the newlyweds, is it appropriate for them to pick up pen and paper and dash off a few notes? Absolutely not, says Lisa Taylor Richey, founder of the Wayne, Pa.-based American Academy of Etiquette. Thank-you notes are the responsibility of the bride and groom. “If they are mature enough to get married, they should be mature enough to write the note,” she says.

That said, it is appropriate for well-meaning friends and relatives to give the newlyweds a gentle nudge to get started on their correspondence. Often, couples put off their notes because they feel pressured to come up with perfect passages describing their appreciation. “A lot of us feel overwhelmed at the prospect of writing,” Richey says. “But a thank-you note only needs to be three or four sentences long. Guests who attended the wedding but did not give a gift also should be acknowledged. “They should receive a nice note thanking them for their presence,” Richey says.

What about digital cards? Is it OK to send thanks via email? Bailey says email is not an acceptable alternative to snail mail. “It’s so infrequent that people receive handwritten notes anymore. This makes it truly special,” she says. “A thank-you note is still the personal way to thank someone for attending your wedding.” She also advises against circulating envelopes at the reception so guests can write their names and addresses for thank-you notes. “Guests are there to have a good time,” she says. “Don’t ask them to address their envelopes.”