Local Couple Takes it One Chapter at a Time 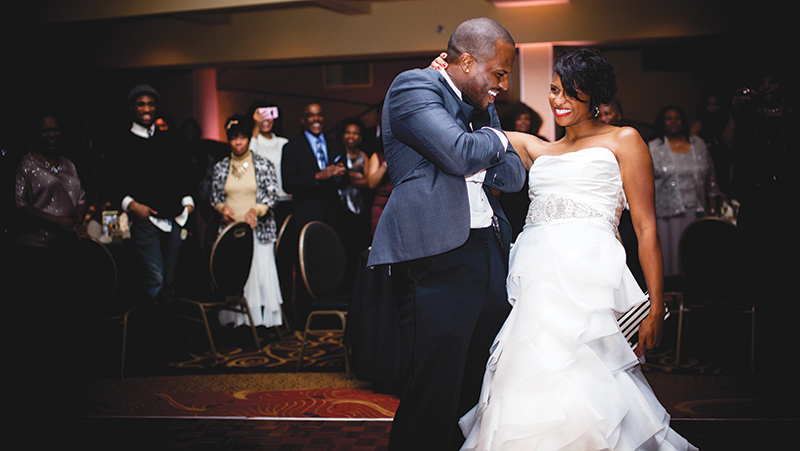 These college sweethearts tied the knot after a 14-year relationship.

BY NICOLE SULLIVAN
As music coursed through the crowd at a West Virginia University party in 1999, all eyes were on freshman football player Lance Frazier. But while he entertained friends with his well-known dance moves, his attention was focused across the room on Glasgow High School graduate Kina Thornton.

“I remember going back and telling my roommates at the time that I saw this girl tonight and that I have to find out who she is,” says Frazier, who now teaches math at Kirk Middle School in Newark.

At the time, the couple had no idea that 14 years later they would live in New Castle as a married couple. A lot would happen in their lives between college and their wedding ceremony at King of Prussia Church of Christ in King of Prussia, Pa.

After spotting Thornton for the first time, Frazier, a Delray, Fla., native, was determined to meet her. Though he was two years younger than she was, Thornton says their chemistry was undeniable. Many nights, the two would talk until dawn, building not only an incredible romantic relationship but a strong friendship as well. “It’s awesome,” Thornton says of their connection. “We’re very playful and just have a lot of fun together.”

Frazier was drawn to Thornton’s strength of character as well as her nurturing and loving nature. “She’s always pushing you to be better, and I needed it,” says Frazier, referring to his former party-boy ways. “I tell people all the time, if it wasn’t for Kina, I don’t know where I would be.”

After college, Thornton continued living in Morgantown, W.Va., working and raising their newborn son Kalen, while Frazier pursued his lifelong dream of playing professional football. His journey took him to many different teams in the U.S. and Europe and eventually to the Saskatchewan Roughriders in the Canadian Football League until his retirement in 2013.

During his career, the family moved to Delaware in 2006, returning Thornton to her roots. The couple welcomed their second child, daughter LaKi, in 2009.

“When you have to split time here and there, your kids are growing and your wife is raising them by herself for half a year, every year—it was tough,” Frazier says. “But one of the reasons why I chose Kina is because at the end of the day, if something was to ever happen to me, she’d be strong enough to handle that situation.”

In 2010, during their Christmas celebration with Thornton’s family, Frazier surprised her with a Louis Vuitton purse, encouraging her to explore its compartments. “I unzipped the bag and saw a little black box, and I just about died,” Thornton says. “He never even had a chance to go on one knee because I was hysterical. I was totally surprised—and I am one hard person to surprise.”

After Frazier left football, the couple started planning their wedding, and on Dec. 6, 2014, they said their vows in front of family and friends.

Thornton wore a Paloma Blanca A-line strapless gown, made of ruffled, silk organza, and a short, cathedral-length train from Anastasia’s Bridal on Concord Pike. The bridesmaids were dressed in neutral grays, taupes and silver Adrianna Papell gowns, complementing Frazier in his gray jacket and the groomsmen in black suits.

“In that moment, you try to take it in and just be calm and relaxed, but it’s emotional,” Frazier says of the wedding. “You start thinking about the wonderful times and how we overcame setbacks. It was almost like an out-of-body experience.”

About 200 guests from all over the country and Canada joined the couple in celebrating their marriage. The reception was held in a luxurious, multilevel ballroom at the Valley Forge Casino Resort and was a mixture of “class and party,” Frazier says.

Thornton was involved in planning the event—from the decor and cake to the hand-painted favors. She incorporated seasonal elements like pinecones, balsam firs and lots of sparkle into a “winter chic” theme, using amber up-lighting and candlelit tables to create a romantic ambiance.

The newlyweds shared their first dance to Anthony Hamilton’s “Her Heart,” followed by a special father-daughter dance to Beyonce’s “Daddy.” One of the most memorable moments, along with 11-year-old Kalen’s best-man speech, was shared with Thornton’s father, Paul. Before the wedding ceremony, she gave him a gift—a small pocket square with a powerful inscription: “Daddy, of all the walks we have taken together, this is one of my favorites.”

It was a tribute to a time when she was 6 years old and her dad was unable to see, hear or walk after undergoing surgery to remove a brain tumor. Using a cane, he would take Kina’s hand while she led him through the streets of New York, where he lived, slowly teaching him how to walk again.

Little did Thornton know that her father’s reception speech included the same memory. “It was just so perfect,” Paul Thornton says. “When she gave [the pocket square] to me, I looked at it, and I got a little misty eyed because it was so touching. But I was particularly moved because it was so much in key with what I was going to share in my own speech.”

Thornton, who now hyphenates her name Thornton-Frazier, and her husband waited until last summer to take their honeymoon. She left the entire planning process in Frazier’s hands. “I did the wedding, and I said you pick the honeymoon,” Kina says. “I am off-duty.”

Frazier did his part, researching destinations until he came up with just the right place for the couple—the Hard Rock Hotel in the Dominican Republic. The couple spent a week in August at the all-inclusive resort.

But their lives are just getting started, says Thornton-Frazier, who recently launched her own invitation company, PrintandScribbles, on etsy.com.

“In 14 years, you’d think we’d have a whole book,” she says. “And I said this in my vows, that was just the foreword. We’re looking forward to the rest of our chapters.”