Make Your Reception a Festive Feast 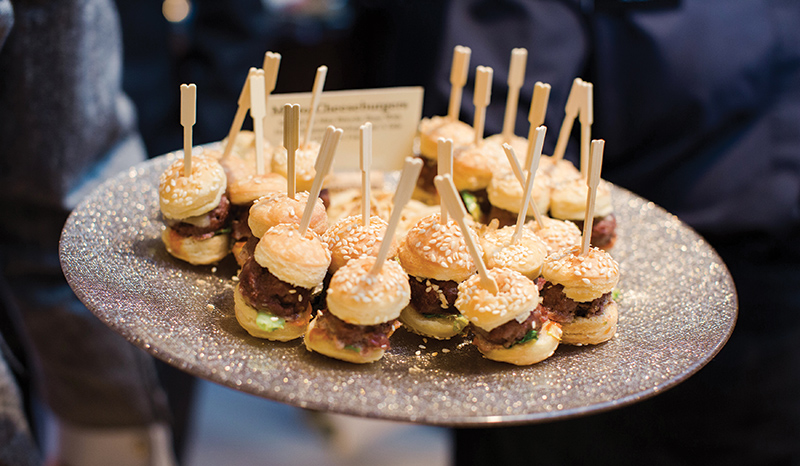 When Valarie and Mark Leary were selecting a site for their wedding, they decided that there was no place like home. The residents of Old New Castle held the ceremony in Immanuel Episcopal Church on the Green and the reception in the parish hall. The caterer was Penn Bistro, part of the William Penn High School Culinary Arts program.

The wedding was at 5 p.m., but instead of a sit-down dinner, the couple opted for a reception with heavy hors d’oeuvres. While cost was a factor, both had been married before. “We didn’t feel a formal sit-down dinner was appropriate,” Valarie says.

Kathy Berg’s daughter went the sit-down route. However, the couple chose a lunch instead of a dinner. “We were done by 5 p.m., and the out-of-town guests didn’t have to stress about having an early morning flight,” says Berg, who lives in Bear. “It also worked for the bride and groom, because he was stationed at Fort Bragg [in North Carolina] at the time, and he had to be back on Monday.” Although the wedding was held at 11 a.m., the couple didn’t skip the traditions. There was a full meal and dancing to boot. Berg’s son liked the idea so much, that he and his bride did the same thing when it was their turn.

These receptions aren’t unusual. “We’ve seen a lot of couples going for more of the different options, and that’s what we enjoy—taking an event and making it unique and out of the box,” says Daria Pantaleone of Fuse Events in West Chester, Pa. Here are some pros and cons of some of the popular types of receptions.

Still prevalent, the sit-down dinner—during which guests are served their meal as though they’re diners in a restaurant—has the most formal feeling.

Pros: Guests feel special. They needn’t worry about standing in long buffet lines. The sit-down meal, which can have from three to four courses, is more leisurely. The couple has time to make the rounds between courses.

Cons: The onus is on the couple or wedding planner to secure and tally the guests’ entrée choices, says Cindy Bene, a wedding specialist at Harry’s Savoy Ballroom in Wilmington. Typically, there are two main choices. However, couples also need to track the needs of guests on a special diet and children, if they’re invited. A detailed list then needs to go to the caterer a month—not a week—in advance, Bene recommends. So it might be necessary to follow-up personally with guests who’ve not RSVP’d. Seated dinners can get drawn out, and while ideally the entrée arrives hot, that’s not always the case, depending on the venue’s quality control. Another drawback: A seated dinner is usually more expensive than other options.

Variation: Servers bring the plated entrée, but side dishes are served family-style. For instance, at the wedding reception of Liz and Tommy Abel, who live in the Greenville area, the guests enjoyed passed salads, breads and sides, and then visited entrée stations for the main course. “It helps with the social interaction at your table,” says Lisa Wheeler, director of catering for Plate Catering, based in Lewes. “People have to talk to each other a little bit.”

The buffet offers a more casual approach. Servers dish out the food or guests can help themselves. Either way, the guests carry their own plates to the table.

Pros: Variety. You can offer more than the usual two entrées. Guests can choose what they want and how much they want. It’s also easier to accommodate a range of special diets. Thanks to chafing dishes, hot food stays warm. Fewer servers are required, especially if guests help themselves to the dishes. A lavish buffet, traditionally placed in a line, also makes for an attractive focal point. Dress it up with flowers and props.

Cons: While generally more cost-effective, a buffet can, in fact, cost as much or more than a sit-down, depending on your choices. Because guests might generously help themselves to food, you must make sure you have enough of each dish. Some guests feel it’s too cafeteria-like. If you have a lot of tables and guests at each must take their turn to get in line, you can wind up with “hangry” guests.

Instead of a straight-line buffet, food stations—each of which has a theme—are sprinkled around the room. “It’s definitely going to get people moving around,” Wheeler says. You needn’t wait on the entertainment. It’s not unusual for music to play as guests move between stations, says Cindy Berkowitz, sales director for Toscana Catering in Wilmington. “It’s not so structured.”

Pros: It’s creative. “Typically food stations are for out-of-the-box offerings,” Wheeler agrees. Think mashed white potato and sweet potato bars or a sushi bar. Berkowitz has offered macaroni-and-cheese stations with different toppings, Thai noodle salad, served in takeout boxes with chopsticks, and an elaborate antipasti display. Action stations add a dynamic flair. Picture a chef making the sushi or whipping up a stir-fry in a wok. “That’s the direction buffets are taking now,” Pantaleone says. “It’s a newer, more fun approach.” Stations can cost less than a sit-down dinner or a buffet because guests only have a few bites at each. However, the pressure to be creative can boost the price. Sushi doesn’t come cheap.

Cons: Going with stations isn’t the best route in a small venue with a large guest list. Your guests will bump into each other going back and forth, upping the risk of someone wearing that clever macaroni-and-cheese dish on their cocktail dress. Before asking for an “action station,” where the chef makes dishes to order, consider the amount of people as well as how long a dish takes to make. For large groups, certain items can be prepared in advance and added to the pan for show during the reception, Berkowitz says. Otherwise you might wait too long to watch mushrooms sauté. Keep in mind that the more chefs you request, the more you’re adding to your catering bill. With either a station or a buffet line, you need to keep the food coming until it’s time for dessert. Nothing is quite as sad as a station that’s run out of food too soon.

Today’s cocktail receptions should leave your guests satisfied. At timed intervals, servers come around with small bites on a tray, and there are also stations for stationary spreads, such as a cheese or antipasti display, and heartier fare, such as sliders or carved beef.

The passed hors d’oeuvres, which start light and progress toward heavier fare, are usually fancy. Valarie and Mark Leary, for instance, had shooters of cucumber soup with Tabasco cream and black garlic at their reception.

Pros: It’s usually less expensive than the receptions mentioned above. It’s also ideal for venues where there’s not enough room for tables and chairs. Consider a beach house rented just for the ceremony and reception, Wheeler says. A cocktail reception is also relaxed, and guests are encouraged to mingle.

Cons: Guests might come expecting a full-course meal. To avoid misunderstandings, state on the invitation that the reception will feature cocktails and heavy hors d’oeuvres. Note that guests might have a tendency to drink more in a cocktail setting, which will up your bar bill.

Banish the thought of sandwiches and soup. Kathy Berger’s children might have had a midday reception, but the meal was more like dinner.

Pros: Even with several courses, a lunchtime meal is usually less expensive than a dinner event. For one, the venue might cost less during the day than at night. For another, people usually eat less at lunch so you can order smaller portions. They also drink less. A midday affair can be cost-efficient for the traveling guests, too. They can drive home during daylight hours rather than spend the night at a hotel.

Cons: Guests might not be quite as celebratory as they would be at night.

A breakfast or brunch is a natural after early-morning nuptials or Sunday morning weddings, but Pantaleone rarely encounters them in the Greater Philadelphia area. They’re more common at the beach, where some couples want a sunrise wedding. “A couple of people do it every year—not a lot,” acknowledges Wheeler. “Usually, these are second marriages, or the couple is older.”

Breakfast, however, isn’t limited to morning. “Some people are doing a breakfast buffet before the reception is over—a midnight buffet, or something like that,” Pantaleone says. These are welcome finales to a five-hour reception.

(Berkowitz at Toscana has also prepared a breakfast menu for a couple’s dinner reception, just because they loved breakfast foods so much. Selections included a frittata and French toast casserole.)

Pros: A breakfast gives the couple a jump on their honeymoon. It’s an interesting option for older couples sans children who don’t want all the fuss of a traditional wedding. It’s arguably the least expensive option of the bunch.

Cons: Your guests and bridal party might not be early risers. Any morning event limits time for primping before the ceremony.

For a hundred years or more, a champagne-and-cake reception was the norm. It was short, salutatory and sweet. Today, you could also add a dessert buffet, fruit, other foods and coffee. Rehoboth Beach-based writer Fay Jacobs held such a reception after she and her wife celebrated their 30th anniversary at a ceremony at CAMP Rehoboth. Again, mature couples or those who’ve been married are more likely to favor this type of reception.

That’s also the case for afternoon teas, but these more feminine events are usually reserved for showers.

So how do you decide what’s right for you?

1. Along with talking to your planner or caterer, determine what the venue can accommodate given your guest count.

2. Create a budget, which might influence the time of day—and even the day—on which you decide to get married.

3. Take your guests and family into account. If many are traveling two hours, an afternoon event might allow them to travel without an overnight stay.

4. Think about the tone of the wedding. Casual and whimsical? Traditional? Intimate?

5. Feel free to mix and match. Have a sit-down dinner and a dessert buffet, for instance.

6. Theme it. A backyard barbecue complete with an onsite smoker makes for a casual, interactive buffet, Pantaleone says. Have fun and have it your way. “People are more curious about what’s out there, and we’re able to guide them, find out what they want and make it all come alive.”