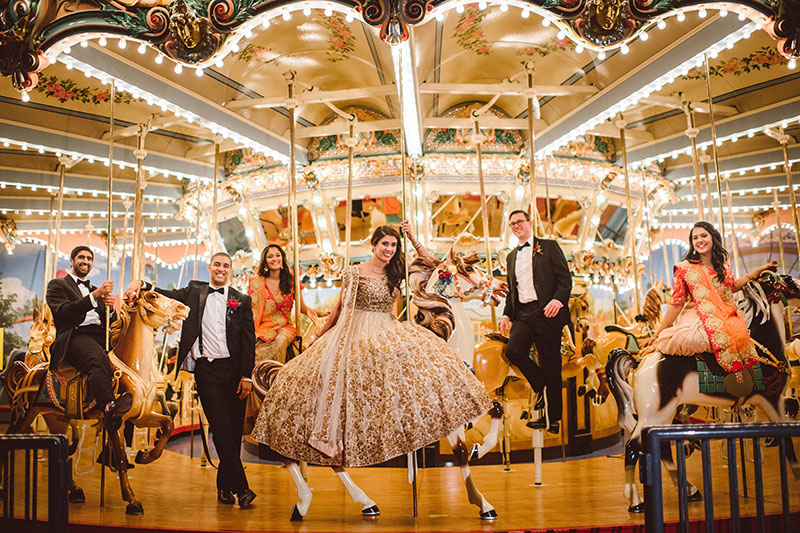 The wedding party has a go-round at the Please Touch Museum in Philadelphia. Photo by Sean Marshall Lin Photography.

From ceremony to reception, break tradition to ensure a lasting impression.

Weddings, no matter what location or religion, have a template. Those templates can stagnate and often have brides and grooms scrambling to mix things up. Unexpected forms of entertainment are popping up, whether it’s an a cappella group at the ceremony, circus performers at the reception or food trucks before the night ends.

Couples also need to keep in mind that certain entertainment needs to be booked further in advance, and the venue must be able to accommodate it. As such, planners like as much advanced notice as possible. “When it comes to entertainment, especially if it’s going to be a cornerstone element of your event, you definitely want to be able to plan for that, and then you can dovetail other things around it,” says Tonia Adleta, owner and creative director of Aribella Events in Exton, Pa.

Keeping it a secret is just as important. “Tell the least amount of people as possible to keep it as a surprise for everybody else,” says Jennifer Supper of Kaleidoscope Weddings in Wayne, Pa.

Ready to get planning? Here are some of the coolest ways to wow your guests. Photo booths are nothing new, but slow motion photo booths are. “The slow-mo booth is kind of a spin on the photo booth, but it creates a slow motion video instead of photos. It’s hysterical,” says Adleta. Both guests and the couple can get copies of their wacky videos, making for great keepsakes. Those looking to stick to the traditional photo booth can add themed props, be it a favorite sports team, pennants from their alma mater, or chalkboards with handwritten messages. Creative backgrounds also add a colorful flair.

Introducing an artist of some kind can be a fun way to engage guests and, like the photo booth, give them a unique wedding favor. Adleta has worked with fashion artists and live event painters at everything from bridal showers to larger parties. Another option is a roving poet. Supper has worked with small teams of poets who have gone around to guests, garnering a few pertinent details, and then written a haiku. “That’s something a little different,” Supper says, noting its popularity with a cultured crowd. Food can easily be transformed into a feature element, if done right. Try making it interactive with a build-your-own bar or tie it into the theme of the wedding. “We had a vintage carnival wedding last summer, and it was at an airport hanger. The wedding cake was actually a stack of funnel cakes,” says Adleta. They also served cotton candy and gourmet corn to guests to keep with the theme. “If you do anything that’s tableside service, people just stop and watch,” says Bailey. Sushi stations, too, add an interesting element, she says.

Midnight snacks are an increasingly coveted option, too. “We’ve done warm chocolate chip cookies with milk shooters, Philly pretzels or cheesesteaks,” says Adletta. Ice cream is a playful option, as well. “Little Baby’s Ice Cream in Philly has an ice cream cart that is really cute. It comes in on a tricycle and you can pick your own flavors,” says Supper.

Food trucks have gained a hold at weddings, whether as the caterer or for midnight snacks. If a food truck is chosen as the caterer, Supper warns they need to be fully staffed so there’s no lengthy queuing. “I think it’s a great feature; a lot of venues are allowing them because they’re so popular.” She also notes that they need to be readily accessible and not pull guests far from the venue.

From spring through fall, lawn games are a trendy way to entertain guests. Old school games like croquet and horseshoes are deviations from the norm. Supper prefers having games available during cocktail hour, but says they can remain present during the reception if there are enough guests. If there are 100 or fewer, she recommends putting them away.

Incorporating animals is increasingly becoming the norm. Usually, it means having a pet walk down the aisle, however, that’s not the only way to have an animal present. A “Game of Thrones”-obsessed couple wanted to give a nod to the fandom, without going overboard. During cocktail hour, they had a live hawk, Supper says. She’s also working on incorporating penguins into a winter ceremony. The bride loves penguins and the idea that they mate for life, so they’ll precede her down the aisle.

For those who don’t want live animals, the kind in the form of a mascot is an option. Couples frequently choose their college mascot to come take photos for a portion of the wedding. “It’s just something a little different that makes your wedding stand out,” says Supper.

Music helps set the tone at the reception. Most couples choose between a live band and a DJ. Supper says having a lead singer who naturally gravitates toward the dance floor adds an engaging element. Those who opt for a DJ can still incorporate a little bit of live music. “An electric violinist is awesome, or a percussionist or drummer,” says Supper, noting that the musician can join in for just part of the reception.

This is also an option to create a show stealer. Bailey coordinated a unique experience for two grooms by flying in one of the top Cher impersonators in the world. “They’re amazingly huge Cher fans, so it was really cool entertainment. It was not just entertainment for the wow factor, but it was personalized to the couple,” she says. Music to Your Ears

While receptions boast most of the entertainment, ceremonies can have a subtle touch, too, usually in the form of music. “There are a lot of things that can be done that are very respectful and very traditional,” says Adleta. Places of worship can be strict about what can and can’t be done inside, so couples will add musical elements to the recessional. “Every once in awhile someone has bagpipes if it’s an Irish Catholic wedding. Trumpet players are also popular in Irish Catholic weddings,” says Supper. Sometimes incorporating entertainment is as simple as selecting a venue that already has a wow feature, making museums ideal. Different exhibits make great backdrops for the ceremony, cocktail hour and reception. “Museums have their own exhibits and galleries that people can tour through, which is awesome because it’s essentially entertainment you’re already paying for,” says Supper. Some venues are even available to rent for just part of the wedding, like cocktail hour, which helps cut down on costs. “It provides a whole other element for your guests,” says Adleta, who has organized weddings at the Please Touch Museum and the Pennsylvania Academy of Fine Arts.

Fall and winter weddings can mean chilly nights or even snow. For a fun and cozy snack, put together s’mores kits. “[Guests] can head outside from the reception hall and, voila, there’s a fire pit,” says Adleta. Similarly, those having weddings near the beach are opting to end the evening with a beach bonfire. “It’s letting the night wind down. If you’re lucky enough to do it on the bay, then the group may be able to set off fireworks,” says Bailey.

Whatever form of entertainment a couple chooses to embrace, it should have a personal aspect. One outstanding, but personal element Bailey incorporated into a couple’s wedding was having the groom’s cousin—an award-winning ballroom dancer—perform with his partner at the wedding. “The whole family got to see this person that gets to travel all over the world. They were watching this amazingly artistic performance, and everyone wanted to take pictures. It was a really cool vibe because you don’t get to see that at every wedding,” she says. Sparklers are increasingly popular and make for great photographs. Photo by www.ulyssesphotography.com.

As the night draws to a close, the final chance to entertain guests—and score some killer photos—is with the send-off. Sparklers have become increasingly popular, but they aren’t legal everywhere. Wish lanterns are also gaining in popularity, though they, too, have restrictions. For an alternative, Supper has used glow sticks to get a similar effect. For those who really want to go all out, fireworks can end the night with a bang. 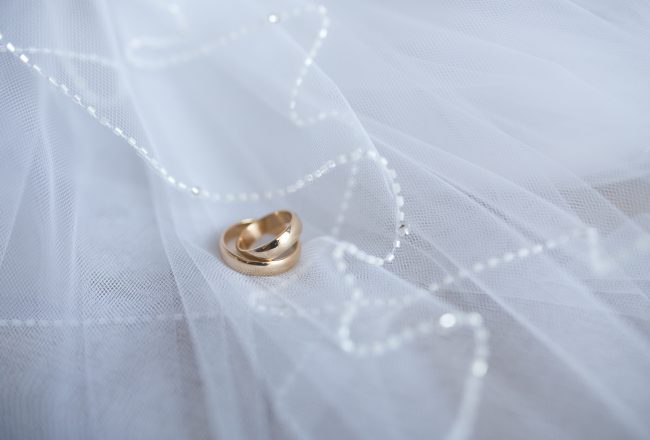 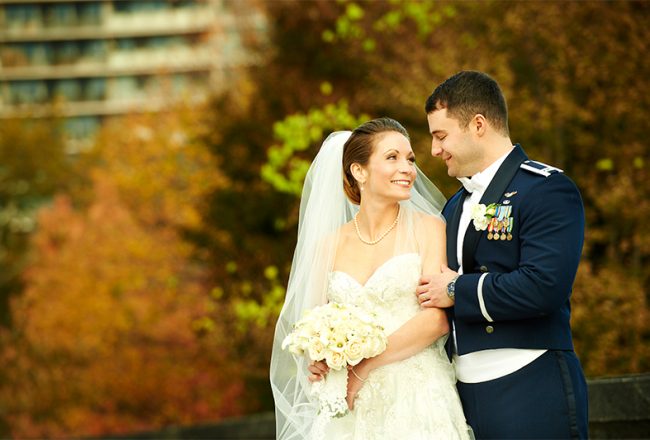 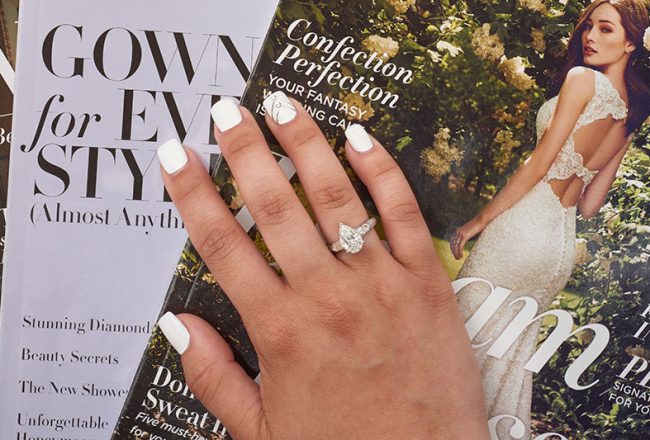 These Wedding Ring and Manicure Combinations are Divine