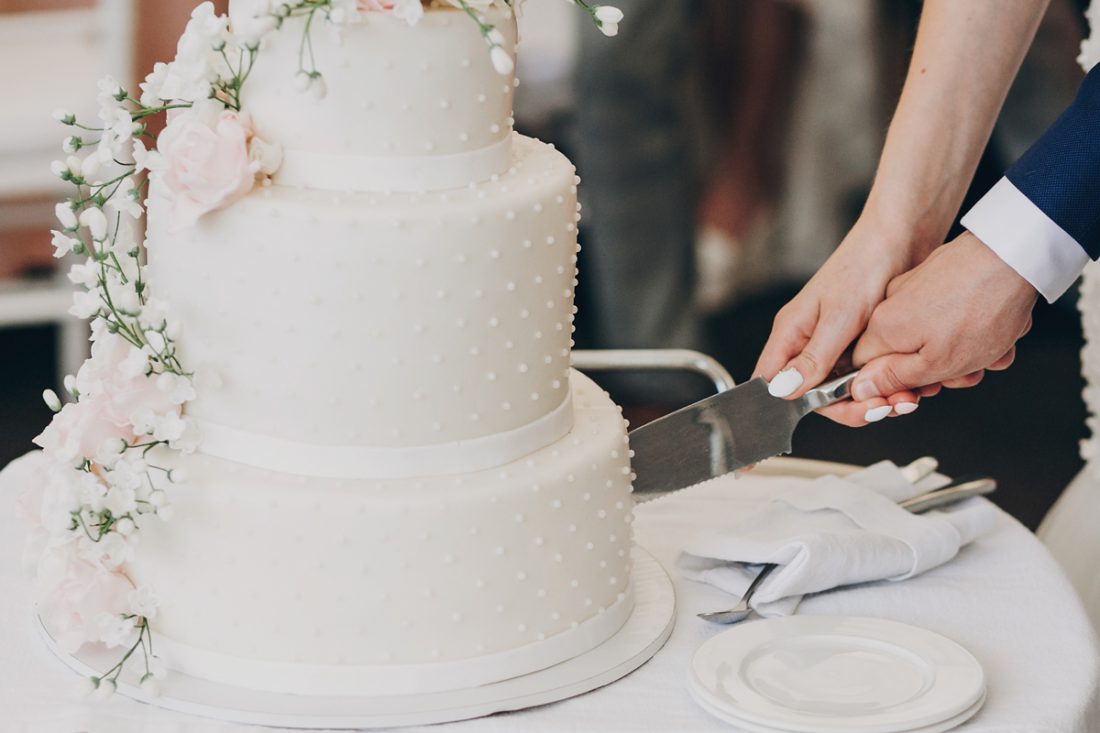 For generations, reception guests eagerly awaited the wedding cake’s arrival. No longer. Now they’re too busy dancing to sit for a slice. Consequently, some couples are considering whimsical options.

A dessert buffet has become the norm, either in addition to a cake or as a replacement. “Millennials are there for the party,” explains Jen Rineer, Carolina Sugar Fairy Custom Cakes and Sweets in Lewes. “I don’t see table service anymore for cake.” Nancy and Rick Leonard of Milford nixed the cake in favor of cupcakes and mini pies from Bella’s Cookies in Milton. “The topper was key lime pie, and that’s what we cut,” says Nancy. The items were free of sugar, dairy and gluten—and much raved about. Michele Mitchell of Michele Mitchell Designs in Wilmington has baked mini bride and groom cakes so guests could take their pick. She’s also prepared an extravagant display of French pastries for a couple who got engaged in Paris. Just remember that many people will eat more than one pastry, Rineer warns. Order more than you think you’ll serve.

Kelly Leishear, owner of Bella’s Cookies, has seen an uptick in cookie orders, which cost-conscious customers arrange on tiered stands purchased on Amazon. Or replace the customary bagged cake slice with a cookie to go. “It’s not as messy,” Rineer says. You can also serve cookies with a hot chocolate bar in the after-hours suite, Mitchell suggests. Just don’t ask your baker to replicate the cake-sized cookie stack on Pinterest. Cooking the first 10-inch tier would be a challenge, Mitchell notes. It might be too mushy in the middle and too crisp on the ends. “I can’t even imagine how you would attempt to cut it,” she added. Instead, she’s made mini cookie stacks that resemble tiered cakes.

An ice cream cake is easier to pull off, and Sweet Lucy’s Ice Cream & Treats in Brandywine Hundred has made plenty for weddings, says Meg Hurst, who owns the shop with her husband, Dan. The Hursts also own Cajun-Sno, the Louisiana-style snow cone truck, which has set up sundae bars at receptions. One couple requested ice cream sandwiches made with cookies. Up next: Eight dozen apple cider doughnuts that the bride will arrange at the reception. Clearly, modern couples are more casual than their parents. Leishear made “Beetlejuice” cupcakes with sprinkles that glow under fluorescent lighting. “It was the most fun I’ve had baking cupcakes,” she says.

“The naked cake—which has only enough icing to provide a peekaboo effect—is still popular.”

Go Against the Grain

If there is a cake, it often won’t resemble past confections. Mitchell recently decorated one with pale pink icing, pink roses, cherry blossoms and shimmering gold strands. The naked cake—which has only enough icing to provide a peekaboo effect—is still popular. A cutting cake for photos is another option. Madeleine Overturf and Robbie Stephens had individual cakes for tradition while guests bellied up to the dessert bar. “I’ve seen that at almost all the weddings I’ve been at recently— or no cake and just doughnuts,” she says.

So, let your imagination go wild. When it comes to dessert, anything goes.