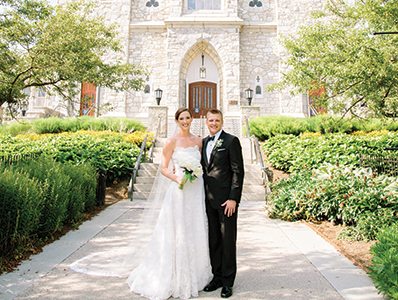 THE VILLANOVA UNIVERSITY CAMPUS HOLDS SPECIAL MEANING TO MICHELE AND HER FAMILY.

From the time she was old enough to start envisioning her future wedding, Michele Marbach Yost pictured walking down the aisle of St. Thomas of Villanova Church on the grounds of Villanova University. The campus held special meaning to her and her family.

Her father, Marty Marbach, was an assistant basketball coach to Rollie Massimino from 1979 to 1987 during the famed time when the Wildcats upset Georgetown to win the National Championship in 1985. “I was baptized at St. Thomas,” says Michele, who grew up in Lower Gwynedd, Montgomery County. “My parents had season tickets to basketball games while my sister and I were growing up. So many of my childhood memories involve Villanova. In my mind, I was sure that was where I would get married.”

Attending Boston College and falling in love with a fellow classmate who grew up in Andover, Mass., could have put a wrench in her plans. Michele met Jon their freshman year at BC. They were living in the same dorm, and they became instant friends. The friendship didn’t turn into a dating relationship until their sophomore year. Little did either of them know that their college romance would endure the test of time to saying “I do.” After graduating, Michele returned to the Main Line area for a year to get a master’s in accounting from Villanova before returning north to start her career in Boston.

Within three years of graduation, Jon decided it was time to pop the question. His initial plan was to ask Michele’s father for permission to marry his daughter when they were together at the Masters Tournament in early April 2012. “I had the ring for a few weeks, and it was burning a hole in my pocket,” says Jon. “I couldn’t wait any longer.” A phone call would have to suffice. His future father-in-law gave an enthusiastic “yes,” and that same night in late March, Michele came home to her apartment to find Jon on one knee, asking her to be his wife. By Jon’s description, it was a “low-key” proposal, though a romantic one with roses, champagne on ice and Michele’s favorite song—Michael Bublé’s “Everything”—playing in the background.

The simplicity of the proposal fit the personality of the couple. “I’m a pretty emotional guy,” says Jon. “I could barely spit out the words when I saw her walk through the door. No matter how much you practice or how sure you are that you know exactly what you’re going to say, the weight of the emotions catch you at that moment.” Michele remembers it as pure perfection.

With her diamond comfortably set on her finger, wedding planning went into full effect. Coincidentally, Jon’s older brother attended Villanova University, so the Massachusetts-based family had a familiarity with the Main Line and was on board with the wedding taking place there. Michele and Jon honed in on places that would allow them to have an outdoor reception under a tent.

One of Michele’s aunts is a member of Radnor Hunt in Malvern, Pa., and the couple went to look at the venue. “We fell in love with it immediately,” says Michele. “The views there are amazing.” The location fit Michele’s theme of having a reception with a classic look with modern touches. The couple had a two-year engagement, deciding on a June 28, 2014, wedding date, so they had plenty of time to tackle the unexpected issues that come with planning a wedding long distance.

Jay Scott Catering in Malvern is the house caterer for Radnor Hunt, and Scott and his crew easily accommodated the couple’s wishes for a non-traditional reception menu with choices like braised short ribs and summer vegetable risotto. Clay’s Bakery in Berwyn, Pa., designed an elegant three-tier wedding cake with gray bows wrapped around each tier, which coordinated with the bridesmaids’ dresses, and a fresh hydrangea cake topper. “The hydrangea is a classic, elegant flower that reminds me of summer,” says Michele. “It makes a simple statement.” Ilonka Comstock, the owner of Ilonka Floral Decorator in Malvern, executed the flowers for the day. Since the bride wasn’t interested in a lot of color, Comstock went with white peonies in her bouquet and white and soft-pink roses for the bridesmaids’ flowers. The couple wanted the tent to have a nautical feel, so they called on Sperry Tents to set up sailcloth tents that were supported with wooden poles.

The bride bought her designer Romona Keveza lace dress at the famous boutique behind the hit TLC show, “Say Yes to the Dress”—Kleinfeld in New York City. She added a sentimental touch by having a cathedral veil made out of her mother’s wedding dress. The groom made a wardrobe change for the reception, switching from a classic Brooks Brothers black tuxedo jacket to a crisp-white dinner jacket. The Philadelphia-based Janis Nowlan Band had everyone up and dancing the entire reception with its mix of contemporary and classic tunes.

In lieu of a traditional guest book, the couple purchased a vintage map of Villanova for guests to sign, and since the groom is an avid runner, they made a donation to One Fund Boston (a charity for the victims of the Boston Marathon bombings) instead of having favors.

The only thing the couple couldn’t plan on was the weather for the outdoor party. Mother Nature, however, was definitely on their side, delivering a picturesque day. “There’s nothing I would have changed,” says Michele. “It truly was my dream wedding.” Her husband concurs. “I’ll never forget when the doors to the back of the church opened and Michele and her dad started to walk down the aisle. It’s the same girl I’d seen for the past seven and a half years, but, man, it’s that wave of emotion, and she looks so beautiful and just stunning. It’s one of those things. I’ll never forget those doors opening as long as I live.”

The Yosts continued the celebration with their relatives by going to Michele’s family’s Shore house in Avalon, N.J., for a week immediately after the wedding. “Jon’s brothers and sister live across the country so it was great to spend additional time with everyone,” she says. The following week the couple left for a honeymoon in St. Barts.