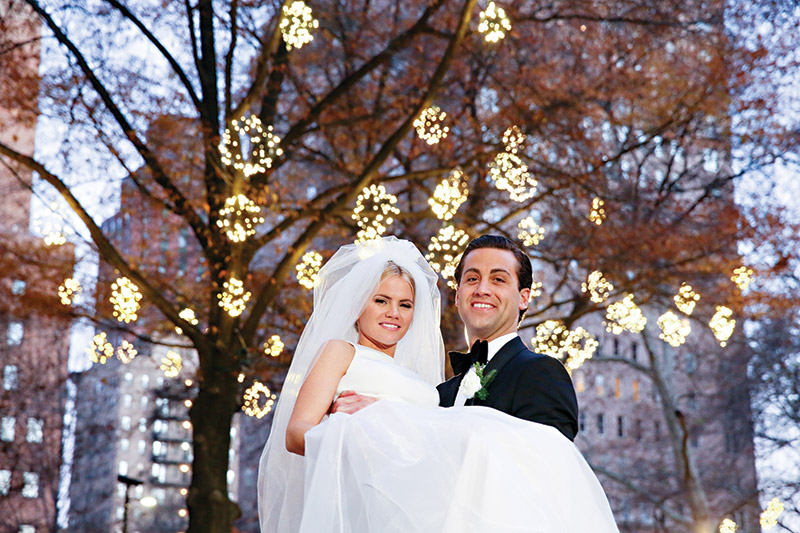 By Danielle Bouchat-Friedman and Tara Behan How they met: Kylie Murray and Brad Bitting went through grade school together. Bitting was a year ahead of Murray and when it was time for high school he went off to the local Catholic boys’ school and she headed to the local Catholic girls’ school. It was during high school that the couple started dating. “We were high school sweethearts,” says Murray. When Bitting chose to attend the University of Pittsburgh, the couple decided to take a break from dating and remain friends through college. Soon after Murray graduated from Fairfield University, she and Bitting met for dinner and their relationship immediately rekindled. They had a long distance relationship for a few years while Bitting lived in Chicago and then Philadelphia, while Murray lived in New York City. “The goal was always for Brad to get to New York and that finally happened in 2012,” says Murray.

How he proposed: “Brad told me that my father was having a birthday party for my mom and that same night his family was having a party nearby that we also had go to,” says Murray of the unforgettable night in November 2014. “As far as I knew, we were going to his family’s party first in New Hope.” Bitting arranged for them to walk down a familiar street in New Hope where they passed Havana, a restaurant where they had their first date when they were 16. “I was saying to Brad, ‘Look it’s where we had our first date,’” says Murray. “And next thing I know he was down on one knee asking me to marry him.” Bitting hired a photographer to capture the moment. “I was so shocked,” she says. “I didn’t even have a manicure done.” The surprise didn’t end there. Bitting continued the ruse that they still had to go to Murray’s mom’s birthday, which turned out to be a surprise engagement party. “I’ve never been so surprised,” she says. “He totally got me.” The big day: Dec. 5, 2015. Murray hadn’t planned on a winter wedding, but she had always wanted to get married at The Union League. But they had very few dates available. One was in September, which was the same date as the Pope’s visit. “I never considered a winter wedding, but once I started thinking about it I realized it was so different and I fell in love with the idea,” she says. Theme: An enchanted, winter wedding. “As soon as I picked the date I knew I wanted it to be Christmas, but not red and green and Santa,” she says. “I wanted it to be very classic, with beautiful greens and candles everywhere.” Favors: In lieu of favors, the couple made a donation to the Lupus Foundation of America.