Opt for a Convenient and Luxurious Honeymoon with an International Cruise 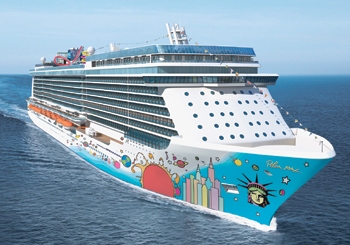 With everything you could need or want contained in one location, there’s no reason not to love the ease and accessibility of a honeymoon cruise.

Newlyweds who are starting life together on a honeymoon cruise can luxuriate in a sea of love—or indulge in cultural pursuits, fine dining or adventurous excursions.

After the stress and flurry of activities that accompany planning a wedding, letting somebody else steer the ship can be the ultimate in relaxation.

“You get to see several destinations without having to pack and unpack,” says Tom Gravett, cruise product manager of AAA Mid-Atlantic in Wilmington. “You can go rock climbing on the ship, visit historical sites at ports or just relax by the pool.”

Three major cruise ports—in Baltimore, New York and Bayonne, N.J.—are popular points of departure because they are an easy drive from Delaware.

“Newlyweds can take the money they save on airfare and put it toward an upgrade to a reservation-only steak house on the ship or his-and-her spa treatments,” Gravett says. “Plus, people like the convenience of a port close to home.”

With an ocean of options, how to choose? Before you book, envision the cruise of your dreams, Gravett says. Do you see an oasis of privacy where you gaze longingly into each other’s eyes? Or would you rather keep busy with volleyball, yoga sessions and cooking demonstrations?

“If you are looking for a cruise where you don’t have to deal with a bunch of kids, Oceania is a good bet because it’s more expensive,” Gravett says. “Or if it’s a second or subsequent marriage and you want to bring the blended family, look at Disney.”

Couples can now tie the knot prior to or during the cruise, but the convenience of blending nuptial and honeymoon venues is not without its limitations.

Until recently, getting married aboard ship was a symbolic exercise in commitment. To seal the deal legally, couples were required to tie the knot on dry land either before or after the cruise.

That changed in 2012 when the Bahamas passed the Marriage Act, which permits marriages in international waters outside the 12-mile territorial limits of any nation. A number of Royal Caribbean ships are flagged in the Bahamas, which allows the line to offer legal nuptials aboard ship.

Royal Caribbean offers a Romance at Sea package that includes the ceremony, flowers, a freshly baked cake and music. It’s free when the wedding party books 12 or more staterooms on a cruise of five days or longer.

Another option is exchanging vows at a stop along the cruise route. The setting might be a house of worship in a bustling port city or an unspoiled tropical beach.

“I was on a tour in Greece and a wedding party went off to ancient Olympia to get married,” Gravett says. “How cool is that?”

Couples also can say “I do” at port before they set sail, then bring the wedding party on board ship for a reception. The upside is the cost, an average of $5,000 compared to $28,000 for nuptials at a venue on terra firma, according to the Wedding Experience, a Florida-based firm that specializes in cruise weddings.

The downside is that the reception likely will be short, no more than three hours, because guests need to disembark before the ship sails. Also, the guest list might max out at 50 people, though the largest ships can accommodate 150 well-wishers. Some lines don’t allow couples to bring their own live music or a professional photographer.

Celebrity offers open-air weddings on the deck of ships in port, with couples exchanging vows under a billowing white canopy. On Princess, chapels are equipped with webcams so newlyweds can share their joy with friends and family at home.

Because cruise lines cater to honeymooners, be certain to mention you are newlyweds when you book. Niceties range from a complimentary cocktail party for couples to breakfast in bed to champagne in souvenir glasses you can take home.

The new 4,000-passenger Norwegian Breakaway, which will launch from New York in May, is awash with amenities that are ideal for honeymooners, including celebrity chef Geoffrey Zakarian’s first restaurant at sea, an aquatic park, an expansive spa with a thermal suite that offers unobstructed views of the ocean, and interactive fighter plane training simulators that offer guests a startlingly realistic experience of piloting a jet.

“A cruise ship is a destination in itself, with a climbing wall, skeet shooting, lots of things for an active couple to do,” says Cecile L. Roth of CRTravel1 in Newark. “In port, couples can see the sights.”

For example, on a Princess tour of the eastern Caribbean, lovebirds can swoop over the rainforest in Barbados. Other options include guided tours of shopping districts and historic landmarks.

Choosing an excursion is a balancing act, Roth says. Typically, booking onboard is more expensive than arranging for an outing on land yourself because the cruise line marks up the price.

That said, it could be worth paying a little extra to lock in hot activities that sell out quickly. “I advise couples to review what is offered and then pick the two excursions that appeal the most to you,” she says.

Arriving at your departure point a day or two in advance? Cruise lines staffers often offer to book a night at a fine hotel for travelers who arrive early.
Before you sign on, Roth suggests asking your travel agent to inquire about reserving a room or making a price check yourself.

“These types of add-ons are usually very expensive,” she says. “You might be able to get a better deal by making a call on your own.”

Balancing Finances During a Honeymoon Cruise

Check out some travel industry insider advice on maintaining a budget, avoiding hidden costs and when to splurge on rare luxuries.

On sea and land, a dismal economy has buoyed bargains, so be proactive in exploring your opportunities for both discounts and upgrades.

Turn plastic into gold by inquiring about amenities that are linked to your credit card. Goodies might range from a welcome basket stocked with chocolate-covered strawberries to an intimate dinner in the ship’s classiest dining room. You might get a modest bump up, such as a $50 cabin credit or an upgrade from interior quarters to a stateroom with an ocean view.

Roth says honeymooners also should seek guidance about what is not included in the fare. Are port charges and taxes included? Do you have to pay for transfers from the airport? What about daily tips for your cabin boy, bus boy, wait person and other crew?

The cruise line staff will provide guidelines for attire before you depart. Though dress codes have become less formal in recent years, shorts and baseball caps are still frowned upon at dinner. For passengers who enjoy dressing up, some lines offer optional formal nights, giving the groom an opportunity to don his tux again.

To entice cruising honeymooners to stay overnight in Canada’s Quebec province, Tourisme Montreal is offering year-round promotions under its Sweet Deal campaign. The reward can be booked directly with the hotel or through a travel agent.

“These packages give access to discounted hotel rates, along with rebates, coupons and transportation titles worth $200 per room,” says spokesperson Jeremie Gabourg.

Not on a budget? Swim in luxury aboard an Oceania Cruises excursion from New York to Montreal. A 12-day cruise includes stops in such scenic locales as Bar Harbor, Maine, and Quebec City. Prices range from $4,499 per person for an inside state room to $12,199 for a 1,000-square-foot owner’s suite on a corner with several ocean views, a private jacuzzi and a 42-inch plasma TV with Bose surround sound system and a library of first-run Hollywood movies.

Crystal is offering a two-for-one special on fares for its Crystal Penthouse, priced at $29,970 for a 16-day excursion from Miami to Peru, departing on Jan. 15, 2015. The suite includes a private dining room, workout room, guest bath, library and veranda. Beds are dressed in Frette linens and cashmere blankets. A butler is on call 24 hours a day to unpack and pack, serve in-suite cocktails and canapes, and deliver daily newspapers.

Standard staterooms are compact. Preserve precious counter space in the bathroom by packing cosmetics and toiletries in a bag you can hang on the back of the door. Don’t jam too much into your suitcase. You can always send clothes to the laundry. “It’s always good to leave room for things you will buy and bring home,” Roth says.

Where to Board: East Coast Cruise Terminals

From Boston to Miami, you can hop along on one of several cruise lines for an unforgettable honeymoon.

NEW YORK
The Manhattan Cruise terminal serves the Norwegian, Carnival and Oceania lines, as well as Cunard, of the famed Queen Mary 2. Destinations include the Caribbean, New England, Canada, Latin America and Europe, as well as one- or two-night “cruises to nowhere” in local waters. Located at 711 12th Ave. Parking is $30 per night. Prices start at $199 per person for an inside cabin on a one-night getaway cruise off the coast of New York. (nycruise.com, 212-246-5450)

BAYONNE, N.J.
Cape Liberty Port serves the Celebrity and Royal Caribbean lines and offers year-round cruises to the eastern and southern Caribbean. From April through October, cruise to Bermuda and the Caribbean; in September and October, cruise to Canada and New England; and in December, enjoy two seven-night Holiday cruises to the Bahamas. Located at 4 Port Terminal Blvd.; a 15-minute ride from Newark International Airport. Parking is $19 a day. Prices start at $499 per person for a seven-night cruise to Bermuda. (cruiseliberty.com, 201-823-3737)

BALTIMORE
Cruise Maryland, at the Port of Baltimore, offers cruises to the Bahamas, Bermuda, Canada-New England and the eastern Caribbean on Carnival Cruise Lines and Royal Caribbean. Located at South Locus Point Cruise Terminal, 2001 E. McComas St. Parking for passenger vehicles is $15 per night. Prices start at $449 per person for a seven-night cruise to the Bahamas. (cruise.maryland.gov, 866-427-8963)

NORFOLK, Va.
Carnival Cruiselines offers five- and six-day voyages to the Bahamas, plus two-day cruises on the open water from Norfolk’s Half Moone Cruise and Celebration Center. Located at 111 Waterside Drive. Parking is $15 per night. Prices start at $429 per person for an interior cabin on a five-night cruise to Nassau and Freeport.(cruisenorfolk.org, 800-327-7276)

CAPE CANAVERAL, Fla.
Cruise Port Canaveral, next to the Kennedy Space Center, is the home port for Disney Cruise Lines. It also serves Carnival and Royal Caribbean. Located at 200 George King Blvd., Cape Canaveral; 45 miles east of Orlando. Parking is $60 for three days, $75 for four days, $90 for five days and $120 for seven days for vehicles up to 20 feet long. Disney Cruises start at about $1,140 for a three-day cruise to Bermuda with an inside stateroom that sleeps three or four. (portcanaveral.com, 321-783-7831)

FORT LAUDERDALE, Fla.
Port Everglades is home to more cruise ships than any other port in the world. Lines include Balearia, Carnival, Celebrity, Cunard, Lloyd, Holland America, Princess, Royal Caribbean, Silversea and Seabourn. Located at 1850 Eller Drive, Fort Lauderdale. Parking is $15 per day. Prices start at about $350 per person for a three-night Celebrity cruise to the Bahamas in an inside cabin. (porteverglades.com, 954-523-3404)

MIAMI
PortMiami recently added Disney and Regent Seven Seas to its roster, which also includes Azamara, Carnival, Celebrity, Costa, Crystal, MSC, Norwegian, Oceania and Royal Caribbean. Destinations range from the eastern and western Caribbean to Mexico, Key West, South America and beyond. Set your GPS to 1015 N. America Way. Parking is $20 per night. Cruises start at $199 per person for an inside cabin on a cruise to the Bahamas. (miamidade.gov/portmiami, 305-371-7678)