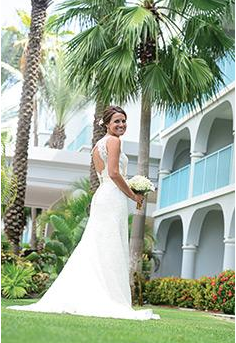 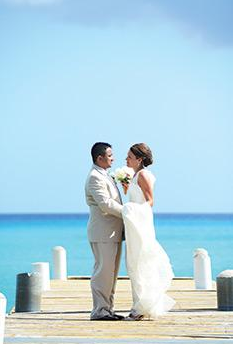 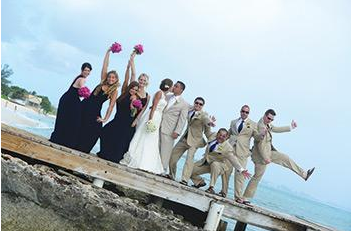 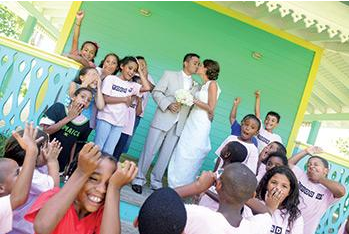 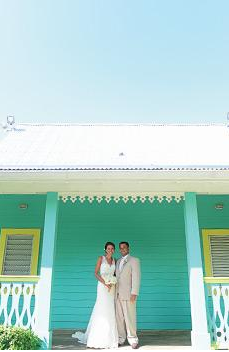 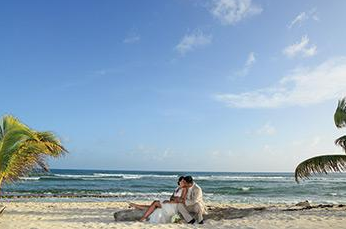 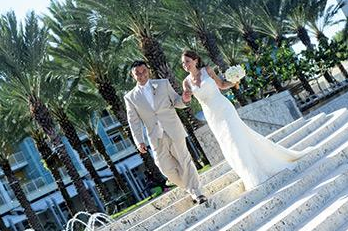 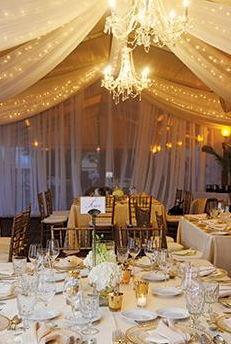 Call it split, non-traditional or destination— one wedding can be celebrated numerous times. And why not? PLUS: Wedding photos from Sarah and Javier Acuna’s celebrations.

Sarah Norris and Javier Acuna say their vows in Spanish and English to accommodate both families. (Their invitations were bilingual, too.)

One ring plus one fiancé equals two—two weddings, that is. Before you run off to Vegas at such a thought, stop to think how marrying your beau twice, rather than just once, may be the answer to your prayers. Doing so can actually create less stress and more joy for you, your fiancé, your families and your guests. And it will give that Elvis impersonator the day off.

Visions of your wedding popped into your head the day you got engaged. They also popped into your father’s, mother’s, sister’s, your soon-to-be mother-in-law’s, your aunt’s, and your aunt’s stepson’s brother’s girlfriend’s. Your mailman may even have ideas for your wedding. It’s up to you and your fiancé to make your ideas work for you, of course, but also to make it work for the people you care about.

The desire to accommodate others led Erin Lazos and her husband, Panagioti (Pete), to get married twice six years ago. “We felt that our wedding wasn’t all about us,” Erin Lazos says.

It was about the people they loved and the people who loved them in return. With most of Pete’s family in Greece and his parents’ desire to throw a big, fat, Greek wedding, the couple decided to tie the knot abroad in a small Greek village. What most of the 500 guests at that wedding didn’t know was that Erin and Pete were already married. They’d said their “I do’s” just a week before at Erin’s church in Parkesburg, Pa.

With two weddings, the couple was able to have all the people close to them participate in the biggest event of their lives. It was irrelevant to Erin and Pete that the event was split into two. In the U.S., they had all the people with them who couldn’t afford the time or expense to travel to Greece, including Erin’s sister.

“We were also able to get married in my church, which was important to me because I celebrated many milestones there in my life,” Erin Lazos says. “Without a church ceremony, I don’t know if I would have felt married.”

So, heritage and tradition presided over both of Erin and Pete’s nuptials. Erin walked down the aisle at her church with her father by her side. And, a week later, she was presented bread baked full of money, and wood chopped by village women in Greece. While dreams of her wedding had never featured the latter, they always centered on family and the joy they would bring. “When we planned our weddings, we knew we had the rest of our lives to make each other happy,” Erin Lazos says. For two days, their life centered on others and Erin celebrated, thrilled by the opportunity to wear her wedding gown twice.

Wearing a dress twice is one way brides who are having two weddings can save money. ‘“Hosting two events means you need to think more creatively about your budget and look for ways to save,” says Jamie Miles, online editor at TheKnot.com.

However, if a couple loses track of their budget when planning just one wedding, expenses can soar. Imagine how high they could fly when planning two. To keep bills in check, Miles suggests talking about budget and expectations with everyone involved early in the process. It can be the difference between breaking the bank and making the bank work for everyone. For example, Miles says, “families may be willing to contribute more to a wedding when they know that the couple is doing what they can to acknowledge their customs or religion.” In addition, these same family members can help with planning the fine details of these traditional weddings.”

The Best of Both Worlds

When Sarah Norris and Javier Acuna began planning their summer wedding, they figured that about 70 percent of their budget would be spent on their beach wedding in Grand Cayman. The remaining would cover a celebration at Acuna’s Wilmington restaurant, Sante Fe, when they returned. While budget was important to both of them, what guided them throughout their planning process was a desire to have an intimate, personal beach wedding that made everyone comfortable, including Acuna’s Columbian family.

“We wanted everyone to feel welcome,” Sarah Norris Acuna says. So, after the couple mailed wedding invitations written in both English and Spanish, Sarah learned how to say her wedding vows in Spanish and hired a DJ that had knowledge of Latin American music.

Planning two events was not as glamorous as Sarah had originally imagined and, at times, it was overwhelming. But, she says, before heading to Grand Cayman, she realized that all the hard work and attention to detail that she and Javier put in would be worth it. “I was truly relaxed and excited for the weeks to come.”

Some 40 friends and family members traveled to Grand Cayman to attend Sarah and Javier’s wedding and to celebrate with them. Some of that group and about a hundred more would join them a few weeks later to continue the celebration in Delaware. To tie the two events together, the couple decorated Sante Fe with photos from their beach wedding and flowers in the same color scheme as the first. A custom-designed belt Sarah wore with a long, ivory lace dress in Grand Cayman graced her waist. This time, it was paired with a short dress, also in ivory. Sarah’s shoes and jewelry also made a repeat appearance.

Sarah is proud that she and Javier kept everything flexible in their wedding planning. The couple even hosted the cocktail reception before, rather than after, the ceremony in Grand Cayman. But, Sarah says, “I am still a princess at heart.” To create an elegant event marked by classic details, she relied on a wedding planner in Grand Cayman. “We put our complete trust in her,” she says.

The expertise that a wedding planner brings to an international event is priceless, even when you are planning just one event. A wedding planner in Grand Cayman, for example, can call on the photographer, the caterer, the hairstylist, and DJ he or she knows to be the best. In addition, relying on a planner for one event will allow you to focus more of your time and attention on the other.

Tiffany Chalk, a Wilmington-based event planner, even hired a planner to help plan her own Jamaican wedding 10 years ago. “Planners help keep you on task by handling logistics and managing the timeline and vendors,” Chalk says. Out of the two dozen weddings Chalk typically plans annually, about one third are destination weddings or split weddings of some nature. These events have brought her to places such as Florida, Chicago, North Carolina, Mexico and Jamaica. “If a plane can take me there, I will go,” Chalk says.

Hosting two weddings sounds glamorous when the reason to do so is geography, heritage or religious beliefs. But, sometimes couples opt to have two events out of necessity, Miles says.

“Financially, a couple may not be ready to host a large reception, so they get married in a civil ceremony and have a big party later.” She says that there is no rule as to how soon after your ceremony you have to host a reception. Knowing that, you and your fiancé can head to city hall today if you simply can’t wait to be married. Once you bid farewell to the justice of the peace, you and your hubby can begin saving for that spectacular reception you’ve always dreamt of.

Some couples may just want to get married sooner rather than later. They may want to reap the benefits of better health insurance coverage. Or, a couple may choose to wed before one of them leaves for military duty. It’s Aunt Ethel who has ideas about the bridesmaid dress color, but it’s Uncle Sam who often determines when a military wedding takes place. Parties, these couples know, can always come later.

Regret can sometimes lead to more than one wedding. A brilliant idea to visit that Elvis impersonator in Vegas years earlier can leave a couple (and their families) wanting a church ceremony, traditional reception and a leather-bound wedding album. While the altar of love served its purpose years earlier, the altar at the couple’s church is pulling them to do it all over again. Miles says: “They eloped and now they feel gypped.”

Regardless of the reason, split weddings make up a growing portion of U.S. weddings held annually. According to TheWeddingReport.com, that number totals more than two million every year. While they may not be as huge a trend as reception lounges or panoramic wedding portraits, split weddings are “definitely something we are seeing,” Miles says. But, be forewarned, if you choose to have two events, a game of 20 questions will begin the moment you announce your plans.

Lazos remembers frequently being asked which wedding she would deem more important. And, people wanted to know when she and Pete would celebrate their anniversary. “We put value on both weddings and we chose our Greek wedding as our anniversary.” No, their friends and family don’t have to shop for two anniversary cards.

Furthermore, expect questions as to which one is the “real” wedding, Miles says. “Find out what people mean by the question and go from there. Or, you can evade the question altogether by reminding everyone how excited you are about both events and restating your reason for having two.” Be clear about why you are doing it and what your expectations are. If you are having one wedding in India, for example, make it clear that you don’t expect people to trek across the world to get there.

Being open and honest will ensure others that you’re planning two weddings for the right reason. Most likely, to accommodate others and to have everyone you love with you for the most important days of your life. You’re not “milking it,” expecting two gifts or selfishly seeking more glory. Instead, you’re making an unselfish choice.

Once you make that choice, share responsibility. Whether it’s your fiancé, friends, family members, a wedding planner or that mailman, other people can offer valuable help. Accept help, especially when it comes to a destination wedding. “Share responsibility,” Miles says. “You’ll find that you’ll be able to dedicate more time to one event than the other.”

The only thing Erin Lazos would have changed about her Greek wedding would be to have enlisted more help. “I wish I’d had a wedding planner in Greece to help with the little details.” She had a difficult time communicating her wishes to her DJ, for example, because she didn’t speak Greek. Sharing ideas with vendors is a detail a planner could easily have handled.

Little details, from the photographer’s style to the color of your bridal flowers, can tie two events together or differentiate them entirely. While Erin and Pete Lazos reminisce about their events over two wedding albums, other couples may weave their two events into one album or even one DVD. To create the feel of one seamless affair, Miles recommends that couples even display the same guest book at each event. They may be two events, but together they mark one important step—beginning a life together.

For the Acunas, the beginning of marriage was marked by two fun-filled events. From a snorkeling adventure in Grand Cayman to a Salsa band in Wilmington, the couple tried to make their events a blast for everyone. That’s fitting for a couple that defines their relationship as fun.

In their case, and in many others, it sounds like turning one wedding into two is an equation for living happily ever after.