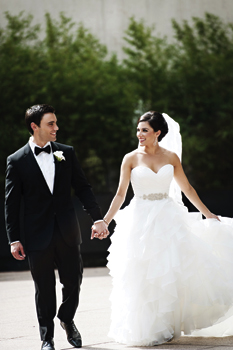 Real Wedding: This union was just meant to be. Call it serendipity. Call it fate. Call it true love.

BY CHRISTINE FACCIOLO | PHOTOS BY M2 PHOTOGRAPHY
A writer once compared happiness to a butterfly. Go after it and it will likely lead you on a wild chase.  Sit quietly and it might just come and rest on your shoulder.

That’s the way it was for Nicole Bosso and Matt DiGiacobbe.  Neither was looking for their life partner when love found them two years ago. Both had had their hearts broken. Neither wanted to risk more hurt. Fate had other plans.

The two became friends in 2007 and Nicole’s mother thought he was a good guy.

“She had always said, ‘Matt DiGiacobbe is such a nice boy,’” says Nicole.  “But it was always just in one ear and out the other because I had a boyfriend and never paid any attention.”

Call it serendipity. Matt had planned to attend American University in Washington, D.C., on a soccer scholarship.  But a shoulder injury sustained in his senior year at Wilmington Christian School made that impossible. He thought about delaying the start of college for a year to rehab when the coach at Goldey-Beacom College in Wilmington offered him a scholarship. That kept him in Delaware.

Their mutual acquaintance ensured that their lives would intersect. They crossed paths at a bar in Trolley Square and hung out together at Point-to-Point, where Matt tailgated.

“I was blown away by him and all his friends,” recalls Nicole. “They went all out and made sure everybody was having a good time. They’re just a great group of guys.”

The relationship remained platonic until May 2010, when they met up with each other in Las Vegas at the Miss USA Pageant. Nicole represented Delaware in the 2007 competition.

This time something clicked. Nicole noticed how refreshingly different Matt was from the other guys there. “All the guys around me were worried about picking up girls and hitting on them,” she recalls.  “Matt was just into having a good time with his friends. He wasn’t so worried about getting a girl to bring home.”

Matt says maybe it was a certain cachet he’d developed since being chosen as Cosmopolitan magazine’s most datable bachelor in Delaware, but he saw something special in Nicole as well. “She’s obviously very pretty. That’s easy to notice,” says Matt. “But she smiles all the time, and she’s always laughing and trying to have a good time, trying to make me laugh. That was the first time I was attracted to her.”

Matt spins Nicole into the room for the first time as man and wife.

Nicole had to leave for a monthlong study trip to Spain, but the couple continued to explore their feelings long-distance. They began dating soon after her return.  Still, the memories of failed relationships left them guarded. Then their personal Cupid intervened.

“When Nicole grew a liking for Matt, she asked me about him,” says mutual friend Vincenza Carrieri-Russo, Miss Delaware USA 2008. “I said he’s a good guy. Both of you would be lucky to have each other. Don’t be afraid to follow your hearts.”

And so they did. In the pre-dawn hours of an October morning in 2011, Matt presented Nicole with a 2-carat princess cut diamond ring and proposed. “I got down on my knee and told her I wanted to spend the rest of my life waking up next to her,” he says. After a quiet dinner, the couple returned home to a surprise party Matt put together so they could celebrate with family and friends.

Wedding plans began in earnest. So what kind of wedding befits a beauty queen?  “Obviously, I love glamour,” she says. “I want everything to be the best of the best.”

Invitations by Apropos of Greenville

Nicole had always dreamed of an elegant affair at the Plaza Hotel in New York City, but realized that travel would be too expensive and time-consuming for guests.  Instead, she chose the Gold Ballroom at the Hotel du Pont, the “golden ticket” of Delaware venues. That gilded elegance provided the perfect complement for the cream, ivory and blush tones of her color pallet.

“We wanted the whole theme of our wedding to be soft, classic and romantic,” she says.

Nicole wanted a dress that was elegant and unforgettable. She chose an organza creation with a fitted, strapless sweetheart bodice and a Cinderella-style skirt. Problem was, so did a lot of other brides.

“I picked out the dress before I realized it was on the cover of Bride magazine,” she explains. “When I went back to the store, I saw five other girls trying on the same dress. So we ended up taking off the side broach and custom-making it with a (Pronovias) belt.”

She chose well. Matt was speechless when he first saw her at the photo session before the ceremony. “She was beautiful—more beautiful than I could have imagined,” he recalls. “When I saw her, I became emotional. Tears came to my eyes.”

Nicole walked down the aisle to the strains of Princess Diana’s royal wedding march, escorted by her mom and dad and preceded by a procession of bridesmaids in pale pink chiffon gowns.

The mothers of the bride and groom performed a special candle-lighting ceremony to signify the union of their families.

Matt’s younger brother Jeffrey served as his best man, offering his thoughts on his brother’s good fortune at finding Nicole.  “They’re basically like the same person. They push each other,” he says. “Matt’s always been a smart kid, but ever since she came around, he’s reached his potential.”

Rings by Indulgence Jewelers of Greenville

The wedding had plenty of lighter moments as well, like Matt’s impersonation of Superman as he and Nicole entered the reception. Nicole indulged his longtime interest in the superhero with a Superman-themed groom’s cake.

Their band, Kristen and the Noise, kept everyone on the dance floor and even had Matt and Nicole on stage singing. The candid shots from the photo booth showed just how much fun guests were having.

“It was elegant and fun at the same time, and that’s not an easy thing to pull off, but they did it,” says Joan Bernard, owner of Barbizon Modeling & Talent Agency in Trolley Square and a close friend of Nicole’s. “I had a great time.  I was one of the last people out the door.”

With Nicole in her second year at Rutgers School of Law and Matt studying for a master’s degree in international business management, time is tight for the newlyweds. But they managed to find time in September for a brief trip to Italy and Spain.

“Matt and I are both of Italian heritage,” says Nicole. “So I think it’s very appropriate for us to go to Italy.”

Band
Kristen and the Noise

Bridesmaids’ Shoes
Their own

In lieu of wedding favors, the couple made cash donations to the Delaware Humane Association.