Honeymoon in the Gulf of Mexico 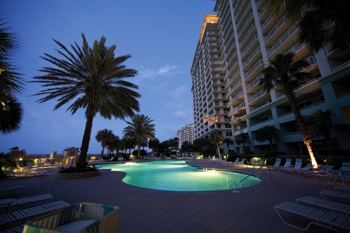 There are plenty of romantic spots along the Gulf of Mexico.

From the sugar-white beaches of Gulf Shores, Ala., to the Florida panhandle’s emerald waters to Southwest Florida’s tropical paradise, the Gulf of Mexico offers a number of diverse honeymoon experiences. But the BP oil spill in 2010—and even the memory of Hurricane Katrina in 2005—have prompted some couples to overlook these destinations. Tourism, however, is on the rise, thanks in part to the more than $150 million that BP pumped into promotion to help areas recover. In Walton County on the Florida panhandle, hotel room tax revenue is up 60 percent since 2010. Top spots to consider:

The oil spill brought attention to the 32 miles of sand that kiss the Alabama Gulf Coast. “I think it put us on the map,” says Veronica Petkov, public relations director for Spectrum Resorts in Orange Beach. What was a negative is now a positive. “People didn’t know Alabama had such beautiful beaches,” Petkov says. After a year of downtime, the sand is now just as sugary white as it was before the crisis.

Where to stay For privacy and romance, consider Spectrum Resorts’ Beach Club, a village-style community with everything you need on-site, including a gorgeous beach. “You can spend the day in the spa, grab something to eat at Southbeach or hang out at the new Village Hideaway bar,” Petkov says. On average, rooms are $300 a night.

If you want a bird’s eye view, check out Turquoise Place, two turquoise-colored glass-front towers with units ranging from 2,500 square feet to 4,500 square feet. All have Sub-Zero appliances and gas grills on balconies. The units average $700 a night. (Supermarkets are nearby if you want to cook in.)

Condos make up most of the destinations’ accommodations, says Kim Chapman, public relations manager for Gulf Shores & Orange Beach Tourism. She recommends checking out the bureau’s Web site and clicking on “Packages & Deals,” then “Romance Packages” for the best rates.

The Emerald Coast and the Beaches of South Walton

Think of Florida and you might picture Fort Lauderdale or Miami Beach, but there’s a 24-mile stretch of gulf beachfront called the Emerald Coast that’s every bit as striking. “Our beaches are just as beautiful and pristine as before the oil spill,” says Allison Phillips, travel industry sales coordinator with the Emerald Coast Convention & Visitors Bureau. “We are fortunate to have a thriving fishing industry providing local seafood.” Destin Harbor is reportedly home to Florida’s largest fishing fleet. Credit the offshore shelf, which plummets to 100-foot depths within 10 miles of the coast.

Along with Destin, the Emerald Coast—served by the Northwest Florida Regional Airport on the Eglin Air Force Base in Okaloosa County—includes South Walton farther down the coast, a 26-mile shoreline with 15 beach neighborhoods.

Prime time The high season starts in spring, about the last two weeks of March, and continues through August, with prices typically rising as the season progresses.

Where to stay There are big names —Ramada, Sheraton, Holiday Inn— inns and condo developments. Rosemary Beach, a planned community launched in 1995, offers a variety of accommodations, from the renovated 11-room Pensione Inn to carriage cottages to large cottages for destination weddings. The carriage houses are economical and smaller, but close to the gulf. Prices run from $200 to $2,000 a night, depending on the time of year and length of stay. The town has a fitness center, pools and restaurants.

The newly renovated WaterColor Inn & Resort, an AAA Four Diamond property, caters to honeymooners, by offering romantic packages that include champagne and chocolate-dipped strawberries, massages and golf at the Camp Creek Golf Club. Packages range from $1,050 to $1,650 for two-night stays. May and August to mid-March are good times if you want to avoid families.

Guests receive complimentary use of kayaks, canoes and bikes to explore the 220-acre dune lake, parks, gardens and beach. Even the walk-in showers have gulf views. Destination wedding planners will appreciate the 4,000 square feet of event space, and wedding guests can opt for vacation home rentals over rooms at the inn.

Between Tampa Bay and Fort Myers, Sarasota is far enough south from the oil spill that its beaches were untouched. Dr. Beach (Florida International University professor Stephen Leatherman) in 2011 ranked Siesta Key at the top of his best beaches list. This area is for those who like a slice of culture served with their sunshine. Sarasota has long been a getaway for wealthy snowbirds, including the Ringling family of the circus fame.

Where to stay Siesta Key, one of the area’s many barrier islands, has long been a hotspot for both weddings and honeymoons, says Kelly Defebo, meeting and group sales manager for Visit Sarasota. “But we’ve seen weddings soar after Dr. Beach named it No. 1.”

For intimate getaways, she recommends the five-bedroom Cypress Bed & Breakfast on the bay. The Martha Rose master suite boasts gulf views from its balcony. Rates run from $180 to $289 a night.

The area has many luxury properties, such as the 226-room Ritz-Carlton Sarasota, which can brag about its beach club on Lido Key and its 18-hole golf course. Rooms start at $413 a night in February, but there are packages. The 294-room AAA Four Diamond Hyatt Regency Sarasota has undergone a $22 million renovation. Rooms start at $239 in February.

Golf on the gulf? “The nice thing about our area is that golf is accessible (public courses) and affordable,” says Erin Duggan, communications director for Visit Sarasota. “From Bobby Jones, the city of Sarasota’s course, to Longboat Key Club’s course, the only golf course on that island, to the Ritz Carlton’s course, we have many.”

Activities Many honeymooners luxuriate by the pool or on the beach. Others enjoy water sports offered in other gulf resorts. Sarasota is also steeped in culture. Visit Cá d’Zan (House of John), the 56-room mansion built by Mable and John Ringling. The house and the John and Mable Ringling Museum of Art are part of the Florida State University Ringling Center for the Cultural Arts. The Marie Selby Botanical Gardens has sunset views over the bay. Sarasota also has a classic car museum, aquarium, live theater, music—even a ballet company. (941-955-0991, visitsarasota.org)

One of the Gulf Coast’s most visited areas, Lee County is home to Fort Myers, Sanibel Island and Captiva Island, making it ideal for sunbathers. The oil spill did not affect the area, which sits all the way down on the southwest tip.

Prime time February to the two weeks past Easter, roughly the end of April

Where to stay On Sanibel, the 114-room Casa Ybel Resort has undergone a $1 million facelift. The property caters to weddings. Thistle Lodge, the old-island manor, was built as a wedding gift in the late 1800s. A suite in February costs about $350 a night.

’Tween Waters Inn on Captiva, which opened in 1931, is listed on the National Register of Historic Places. Rates for a night in February range from $190 for a poolside guestroom to $300 for a bayside suite.

Gulf resorts can offer all the sophistication of a European city or the get-away-from-it-all ambiance of a South Seas locale. They can be a thrill ride or an idyllic stroll. Check out these destinations that pepper the curling coast.

Good for Couples who like all the attractions of a boardwalk and a theme park—with the view as a bonus. Picture a giant pyramid, an aquarium and 3D theaters. Depending on when you go, you will no doubt share your experience with kids.

Where to stay The Moody Gardens Hotel, whose botanical gardens and palm beach make excellent places to say, “I do.” Moody Gardens, 800-583-4673, Moodygardens.com

Good for Those who want a city experience instead of a beachy one. Known as the Paris of the South, the Big Easy has a romantic side, especially if dinners a deux and carriage rides are your thing.

Where to stay The Hyatt French Quarter recently underwent a $20 million renovation. The W New Orleans French Quarter was scheduled to reopen in August. The property features the SoBou (South of Bourbon) restaurant. The courtyard can hold 150 for a wedding. The Studio Room is ideal for 50. New Orleans Convention & Visitors Bureau, 504-566-5011, neworleanscvb.com

Good for honeymooners who want a beach vacation in the Deep South and couples who like to spice things up with some casino action. The state has 62 miles of coastline, 12 casinos—including the newest, Jimmy Buffett’s Margaritaville on Biloxi Bay—18 championship golf courses and seafood—lots of it. This area also celebrates Mardi Gras. Laissez les bon temps rouler!

Where to stay Many of the casino resorts offer honeymoon packages. There are well-known national chains and bed-and-breakfast properties. There are also plenty of high-rise condos with views. Mississippi Gulf Coast, 888-467-4853, gulfcoast.org

Good for Those who plan to spend most of their time soaking up the sun. Dr. Beach consistently ranks the area’s beaches at the top of his best beaches list. Among the honorees: Clearwater Beach, Caladesi Island State Park and Fort Desoto State Park. (The fort is a Spanish-American War-era prison.) Clearwater Marine Aquarium, by the way, is the home of Winter, star of the movie “Dolphin Tale.”

Where to stay Sandpearl Resort loves lovers. Along with offering eight wedding venues, including two on the beach, the hotel gives a free anniversary night stay to couples who wed there. Visit Clearwater, 888-425-3279, visitclearwaterflorida.com