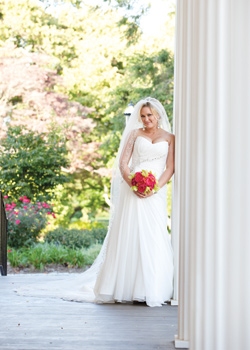 Both reality-TV show veterans, the duo opted for a Caribbean-themed ceremony and reception for their October 2012 nuptials.

As weddings go, it had all the right ingredients: a sprinkle of Latin flair, a splash of brewer’s whimsy and a touch of island spice. Shake well, pour into an elegant setting, then add a generous helping of fun. This was the Oct. 14, 2012, wedding of Julio Lazzarini, chef-owner of Orillas Tapas Bar & Restaurant in Wilmington, a former contestant on “Chopped,” and caterer Jennifer Behm, winner of “MasterChef” season two.

You’d expect something special from the two celebrity chefs, and the 142 guests on that sunny afternoon weren’t disappointed. “It was a beautiful gathering of close friends having a good time,” says friend Joel Plotkin, the photographer. Spencer Graves of WSTW, who did DJ duties, succinctly calls it “one continuous party.”

A Recipe for Success

Not surprisingly, the couple met in a restaurant. It was 2001, when Lazzarini was the executive chef at a downtown Wilmington eatery. “He made this mignonette for oysters that was divine,” Behm says. “It had the perfect cucumber-to-lemon ratio. I had to know who made it.”

She asked the bartender, who pointed to a chef with long hair. Behm walked over to introduce herself. He said hello in what she describes as the “sexiest voice ever.” But by the time she turned to introduce her friend, he’d disappeared.

“She made me so nervous, I could not even speak,” Lazzarini says. “I ran back to the place where I was comfortable—the kitchen.” Certainly Behm, who was crowned Miss Delaware in 2000, could leave a man tongue-tied.

The bridesmaids wore island colors such as aqua. Groom Julio Lazzarini wore a tie of pink, his bride’s favorite color.

Fast forward to November 2011. Behm had snagged the “MasterChef” title, surviving tough criticism and a snarky colleague’s sniping. With some of her winnings, she’d opened Pink Martini Catering.

Lazzarini in 2009 had tasted cooking show fame as a contestant on “Chopped.” Both chefs were invited to participate in the Winemakers Dinners organized by Ajit George of Wilmington and held in the British Virgin Islands.

The event whet more than the couple’s appetite. The other chefs couldn’t help noticing the sparks between them, says Mathayom “Mat” Vacharat, executive chef of the dinners. “They were showing signs that they were into each other,” says Vacharat, a Philly-area native.

The couple’s first date happened at Capers & Lemons in Wilmington. One date led to another. “It’s nice to have someone who shares the same passion as you,” Behm says. Soon they were collaborating on menus and special dinners. “We love bouncing ideas off of each other for future projects.”

Behm and Lazzarini married during an afternoon ceremony at the beautiful Buena Vista estate in Llangollen.

One future project: a family. With a proposal in mind, Lazzarini began shopping for an antique-style ring with diamonds and sapphires. He found one online, appropriately named the Jenny, which he bought at Steven Singer Jewelers in Philadelphia.

On Valentine’s Day, after a busy night at Orillas, the couple headed to Behm’s house. “Before I could take the dog out, he was on one knee, with his gorgeous eyes looking up at me,” she says. Through her tears, she told him she would marry him.

Lazzarini is from Puerto Rico, and Behm loves the islands, so they wanted to get married in the Caribbean. But Behm, the eldest of three children, is the only girl, so her family would have been upset if they couldn’t see her marry. So the couple decided to take the islands to their guests. With the help of Coleen Fitzpatrick of Flourish Designs Unlimited in Wilmington, they’d mix the charm of Buena Vista, a state-owned property that dates to the mid-19th century, with the tropics. (The estate had impressed Behm when she catered the governor’s economic dinner there.)

Celebrity makeup artist Adrienne Bearden-Gardner, who worked on the film “The Lovely Bones” and the TV show “It’s Always Sunny in Philadelphia,” did the honors on wedding day

Behm, who has a predilection for pink, wanted pink peonies, but they’d be out of season. Instead, Fitzpatrick offered pink garden roses. Not only do garden roses look like peonies, but the English garden-like flower would also suit the country estate.

Wearing the colors of sea glass—cobalt blue, aqua and green—the bridesmaids would carry only the roses.

The chefs talked about preparing the food themselves. Then they asked Vacharat to do the honors. An island-inspired menu was a given: scallop ceviche on plantain tostones, coconut rice and grilled shrimp croquets, and suckling pig. The menu also gave a nod to Lazzarini’s tapas-inspired restaurant with such dishes as paprika-grilled octopus skewers with saffron-aïoli dip and sea bass al ajillo. As a nod Behm’s roots in Reading, Pa., where Pennsylvania Dutch dishes rule, the menu included fried chicken and a mashed potato bar. Given the participants, the menu had to feature some innovative options: open-faced lobster profiteroles with arugula pesto, bruschetta with Beluga lentils and candied bacon, and mushroom duxelle straws.

Graves, who Behm met during an on-air interview, handled the music. “I do maybe one wedding a year, and I told her I’d love to do hers,” he says.
The couple asked a friend, a judge, to officiate, but he had to go out of town. Behm’s favorite college professor, a minister, agreed to step in. Unfortunately, he had a death in the family shortly before the wedding.

Beaded pumps subtly say “I do.”

One night at Orillas, Behm and Lazzarini shared their dilemma with customer Sam Hobbs, owner of Twin Lakes Brewing Co. in Greenville, and his wife.

They suggested head brewer Rob Pfeiffer, an ordained “Dudeist” priest of a religion inspired by the film “The Big Lebowski.”

A Dash of Hollywood

With a priest from the Church of Latter-Day Dude and links to TV, the wedding had other connections to popular culture. Behm, who blogged for People.com after her win, was invited to film her dress hunt for TLC’s “Brides of Beverly Hills.” TLC flew Behm, her parents, and bridesmaid Tracy Kontos, also a contestant on “MasterChef,” to Beverly Hills.

Show host Renee Strauss pulled four dresses. The first, a draped, strapless dress with a sweetheart neckline, was gorgeous. The second was, well, pretty. The third had what Behm calls “technical difficulties.”

Strauss jokingly called for scissors as Behm wiggled and the ladies tugged. With the team effort, she finally got free of the clinging gown. Again, Behm tried on the first dress. “When I walked out and saw my dad’s tears,” she says, “I knew it was the one.”

Celebrity makeup artist Adrienne Bearden-Gardner, who worked on the film “The Lovely Bones” and the TV show “It’s Always Sunny in Philadelphia,” would do the honors on the big day.

Lazzarini wanted to wear comfortable clothes, despite Behm’s fairytale dress. He opted for a linen suit.

Lazzarini, who’d been married once before, wanted to play an active role in his wedding to Behm, and that meant wearing comfortable clothes. He opted for a breezy white linen suit and, of course, a pink tie.

Lazzarini and Behm helped prep the food the day before, but Vacharat forbade them from working on their wedding day. It wasn’t easy to convince Lazzarini, who is a “freaking workaholic,” Vacharat jokes. “I said, ‘Take one day off.’”

Getting Behm into her dress took a village, with one friend lacing, another under the skirt to pull it down, and a third making sure it was straight. When Behm walked into the sunshine for the 3 p.m. outdoor ceremony, the guests—and the groom—had to catch their breath. “I felt like a princess,” says Behm, whose cathedral veil added to her Princess Aurora air.

Lazzarini’s daughter, Jeme, took part in the couple’s symbolic sand ceremony.  They gave her a watch to remind her “we are with her no matter what time it is,” Behm says. Jeme’s speech to the couple made everyone tear up.

After the wedding, guests went inside for a cocktail hour before moving to a white tent accented with pink up lights. At each seat was a bottle of the couple’s own spice recipe, J&J Rubbernecking Rub. The name came from Lazzarini’s fascination with the term, which he’d never heard until the couple encountered a car accident one day on I-95. “It became his new favorite thing to say,” Behm says.

Other than asking for the song “One Day My Prince Will Come” for the newlywed’s entrance, the couple let Graves pick the selections for traditional dances.After that, there was little talking on his part, he says. “They just wanted to dance as much as possible,” he says. Behm’s nephew Christopher won applause for his robot moves, and ladies ditched their dress shoes for the flip-flops the couple provided. The newlyweds cut a cake topped with a princess kissing a frog.

Throughout the evening, guests wrote warm wishes on pieces of paper dropped into a decorated box that represented a message in a bottle. “The idea is that on their first anniversary, they open them up and read the sentiments,” Fitzgerald says. ‘Your goal is to read it every year.”

No doubt, there’ll be many tasty memories to savor. The unconventional officiator, the linen meets lace, and the feast were all just as Behm and Lazzarini imagined it. “We wanted everyone to have a blast and to celebrate life,” she says. “We danced, laughed and enjoyed great friends.”