Today’s bachelor and bachelorette parties are made for making memories.

Bachelor and bachelorette parties have long been laced with stereotypes. But strippers, body shots and hangovers are no longer the last salute to singlehood. Today’s couples want to create memories, not lose them.

Destination parties give participants plenty of time to reconnect. Tessa Lingo of Lewes, for instance, spent a weekend in Hershey with seven friends before her wedding. The sweet treat was her idea. “I love chocolate,” Lingo says. “I really wanted to experience the chocolate spa, to indulge in chocolate with all of my senses and to soak in a big cup of hot cocoa. Plus, I was seeking a unique experience for my girlfriends to share and remember.”

In addition to spending time in The Spa at the Hershey Hotel, the friends went to Hershey Park and dined in a private dining room at Devon Seafood + Steak on Chocolate Avenue. They also took a limo bus to downtown Harrisburg for a bar crawl that included a stop at Level 2, known for its signature cocktails, boutique service and bottle service. “The weekend was perfectly balanced with thrills, partying and relaxation,” Lingo says.

Her husband, Jack, and his friends spent a weekend in Chicago, which included a baseball game at Wrigley Field. “We both chose spots where none of our friends had frequented before for other bachelor-bachelorette parties, and they both were a blast,” Lingo says.

A weekend away can get pricey. Fortunately, a destination party isn’t confined to overnight stays. Before getting married in 2014, Andrew Dickinson had a bachelor party with five friends. Though close, the men’s busy lives made it hard to get together. “Three out of five work in the restaurant industry, and one lives in Pennsylvania,” Dickinson says. Instead of screaming over loud music in a bar, the men rented a pontoon boat for the afternoon and went fishing. They later went out for dinner and beers. “There were no strippers, no glitter,” he says. “It was exactly what I wanted to do.”

Matt Patton of Rehoboth Beach went to Philadelphia with friends not to pound shots in the bars but to visit hip restaurants, including Marc Vetri’s Lo Spiedo, Monk’s Tavern—which helped bring craft beer to Philly—Brahaus Schmitz, the trendy German beer hall, and the iconic Tony Luke’s. “No debauchery,” he says—unless, that is, you count indulging in good beer and food.

When Lauren Manzi’s maid-of-honor asked Manzi what she wanted to do, she replied that she wanted an outing on a boat with gal pals. Eight women drove to Chesapeake Inn in Chesapeake City, Md. They then boarded a limo for a ride to a marina, where a motorboat with a cooler full of libations awaited them. Each passenger received a sailor’s hat. During the three-hour excursion, the boat stopped at a beach, where the ladies disembarked for food and drinks. “It was a beautiful day,” she recalls, “with the wind blowing in our hair.”

The boat then took them back to the Chesapeake Inn, where they had cocktails and dinner, and they danced outside in the clubby patio area.

Manzi planned an event for her best friend, which included a lingerie party first, then a tour of local wineries in a limo. On one stop, they enjoyed a catered meal. “We drank a lot of wine and sat outside, and then the limo took us back to her house,” she says. “A couple of us went out that night, but it wasn’t part of the bachelorette party.”

On both occasions, the brides-to-be wore sashes imprinted with their future married names. “You do the crown thing—the tiara—but no blowups, no male strippers,” Manzi says, “although my husband swears that we did.”

Her husband, John, had a more traditional outing—but with a twist. That included a nice dinner and a trip to a cigar lounge on the party bus circuit.

Whether you’re planning a day on a boat or a weekend in the big city, here are a few tips for a successful event: 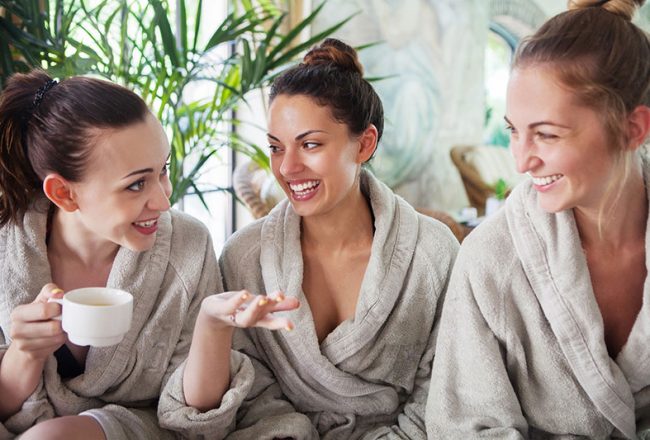