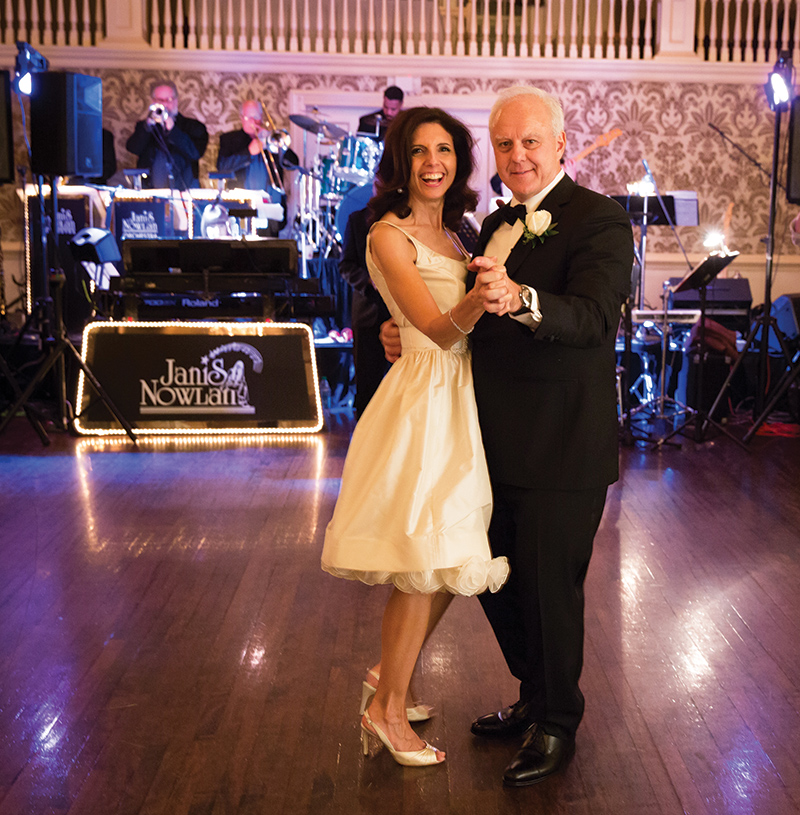 The second time’s the charm for this Main Line couple.

It sounded more like the perfect opening scene of a rom-com movie than it did real life. A woman with a sprained ankle, trying to steady herself on crutches as she leaves an office meeting, loses her footing and drops her handbag, briefcase and, of course, her two crutches. Enter a dashing gentleman, who happens to see her struggle and swiftly rescues the damsel in distress. Fast forward 10 years of dating, which included a two-year engagement, and the man and woman marry and live happily ever after. Seem too good to be true? Not at all. This is the beginning of the love story of Ellen Langas of Downingtown, Pa., and Brian Fillion of Medford, N.J. “I was literally swept off my feet by Brian,” says Langas. Both had previously been married. Juggling dating, along with raising children (Langas has two daughters, Stephanie and Veronica; Fillion has two sons, Ben and Matt) and each managing their own careers, made the couple take the relationship slow. Eight years into the relationship, Fillion proposed.

During their engagement, Ellen and Brian had more than enough time to make sure all the details of their Sept. 6, 2014, wedding were exactly as they envisioned. “Since this was my second wedding, it was terrific to be able to plan without any stress,” says Langas. “We simply wanted it to be a celebration of family and friends.” Fillion was on board with the plan. “We wanted a celebration to get the family together,” he says. “I left the rest of the details up to Ellen.” Main Line-based vendors helped Langas pull together all the details. “My daughter and I went to a bridal fair, and everyone assumed she was the one getting married,” she says with a laugh. The Wedding Pavilion at VanCleve in Paoli is where Langas found the dress she thought was appropriate for a second wedding. The winner was a Marisa Baratelli ivory, cocktail-length, full-skirt party dress made of hand-woven Thai silk with a pearl belt and an organza crinoline. Both of Langas’ daughters were her bridesmaids and wore complementary black, knee-length, full-wrap Ralph Lauren dresses. Bryn Mawr Flower Shop designed a bouquet of hydrangea, hypericum and seasonal flowers in shades of soft peach, green and ivory for the bride and similar bouquets for the attendants. Linda Broder, owner of Pen & Paper in Bryn Mawr, assisted the couple in choosing classic ecru invitations with a subtle beaded border.

For the site of the ceremony and reception, the couple wanted a venue that was close to their Haverford home since they were having out-of-town guests. The historic Merion Cricket Club in Haverford met all their requirements. “The Cricket Club embodies the rich heritage of the area, and it’s a familiar landmark that we pass every day as we come home,” says Langas. They held the ceremony in the salon area of the club, which has a wall of windows that provides stunning views of the grounds. The 100 guests easily flowed into the ballroom, perfectly sized for the reception. Since they wanted to be able to freely mix and mingle with their guests, the couple decided on a cocktail-party-style reception instead of a formal sit-down dinner. Food stations included favorites of both the bride and the groom, including roast tenderloin with whipped sweet potatoes and grilled zucchini, and a pasta station with mushroom ravioli with veal demi-glace. Aux Petits Delices in Wayne created a traditional, ivory pound cake. As a nod to her Greek heritage, Ellen’s mother made sure to fulfill her request to have her favorite Greek dessert, baklava, also represented on the table. With Ellen being 100 percent Greek (Brian is part-Greek), baklava wasn’t the only Greek aspect of the wedding.

In that culture, weddings are celebrated in a big way (very similar to the hit movie “My Big Fat Greek Wedding,” sans the drama). The celebration began on the Friday evening before the wedding with a huge Greek feast at the couple’s home, bringing together both of their families. On Sunday morning, following the wedding, the guests were invited back to their home for brunch. Out-of-towners included Fillion’s two brothers and their spouses, along with his sister, who all flew in from Fillion’s hometown of Newport, R.I. Langas’ sister and her family arrived from Pittsburgh, as well as her mother, who calls Clearwater, Fla., home. “We had our friends from childhood, high school, college and work at the wedding,” says Langas. “It was a reflection of decades of the special people in our lives.” Langas knew that Greek dancing would play an important role in the reception, so the couple hired a band that could accommodate that wish. The Janis Nowlan Orchestra of Exton, an 11-piece band, kept guests on the floor dancing all night to classic hits and traditional Greek favorites. Janis Nowlan is also a classically trained pianist and performed during the ceremony. Fillion took the lead in picking the song “Cheek to Cheek” for the couple’s first dance as husband and wife. “We both really enjoy the song, and it reminded me of Ellen,” says Fillion. That wasn’t the only memorable song of the day.

As Langas walked down the aisle at the beginning of the ceremony, eight of her friends and her daughters started singing “Going to the Chapel of Love.” “To add to the fun, many of the guests joined in spontaneously and sang along,” says Langas. Laura Munts, a long-time friend of the couple’s, officiated at the wedding. “It was such a beautiful and fun wedding to be a part of,” says Munts. “Brian and Ellen really champion each other. They don’t find shortcuts. They know how to love, and they share that love with family and friends. That’s what their day was all about.” In addition to planning the wedding, Langas and Fillion were also renovating the 100-year-old carriage house of the old Pew Estate in Haverford. The renovation was finished just in time for the wedding. The Wednesday before the Big Day to be exact. “I’ve never seen Ellen so happy—other than our wedding day—than the day the contractor was finished and left the house,” says Fillion. “I definitely wouldn’t recommend other couples to take on wedding planning and a home renovation at the same time.” Both endeavors, however, turned out exactly as planned. The couple rewarded themselves with a romantic, five-day honeymoon getaway to Paris. “We had both been there before, so we didn’t need to spend time sightseeing,” says Langas. “We just walked and bike rode throughout the city. Enjoying it all together.”